Lucas was really quite impressive during the flight (we flew with Saudia) we made sure we took the iPad with his favourite videos on and some finger snacks which always keep him occupied! He didn’t make a sound the whole way!

And we were doing so well…..So it turns out when you hire a car you need to have 6 months left on your credit card or they don’t let you hire the car (must read small print next time), though in our defence, who gets a new card 6 months before the old one expires?!!!!! So, no hire car and therefore no car seat. Turns out this isn’t actually as bad as you would think, yes it goes against the parental grain, but when on holiday sometimes it just isn’t feasible to have everything you usually use and need. We kept Lucas strapped in the baby carrier, facing backwards and with the seatbelt strapped over both him and whoever was carrying him. We spent the whole holiday travelling like this with no issues.

Both mine and Dave’s favourite hotel pre Lucas, we had never noticed just how family friendly it was before but I couldn’t recommend it enough for a family visit, sure, its not cheap, but with the extensive facilities and services they offer we were happy to pay it!

As it was my special birthday treat we decided to pay for the Imperial Club which is basically the normal room but with access to the imperial club floor and amenities. Check in was a breeze as you get your own special area to check in up on the club floor. We were welcomed in and told to help ourselves to drinks and snacks whilst they checked us in. a welcome break after the flight and car hire debacle!!

A really good size, the hotel also provided a cot for us, which, although cumbersome, did fit in the room with us with space to still move around! We had balcony with a small table and 2 chairs, a god send once Lucas was in bed of an evening! TIP: When booking rooms the King size rooms rather than Queen size have the bigger balcony. We had a nice big bathroom with a bath and rain shower.

Amazing, I couldn’t recommend paying the extra enough, you get free breakfast (which is £25 each alone usually). There are two club rooms which (throughout the day) provide breakfast, light snacks, light lunch, afternoon tea and a cocktail hour (5 until 7). The club room on the 12th floor had a children’s play area with toys for babies, a TV with cartoons and also a nintendo wii for the older children. We were able to enjoy a cocktail or two whilst letting Lucas play and keep himself busy in the playroom. The club suite also provided Ella’s Kitchen baby food for Lucas which was fantastic, all be it they had a limited selection of flavours, it was good to know there was something he would eat if nothing else was available! 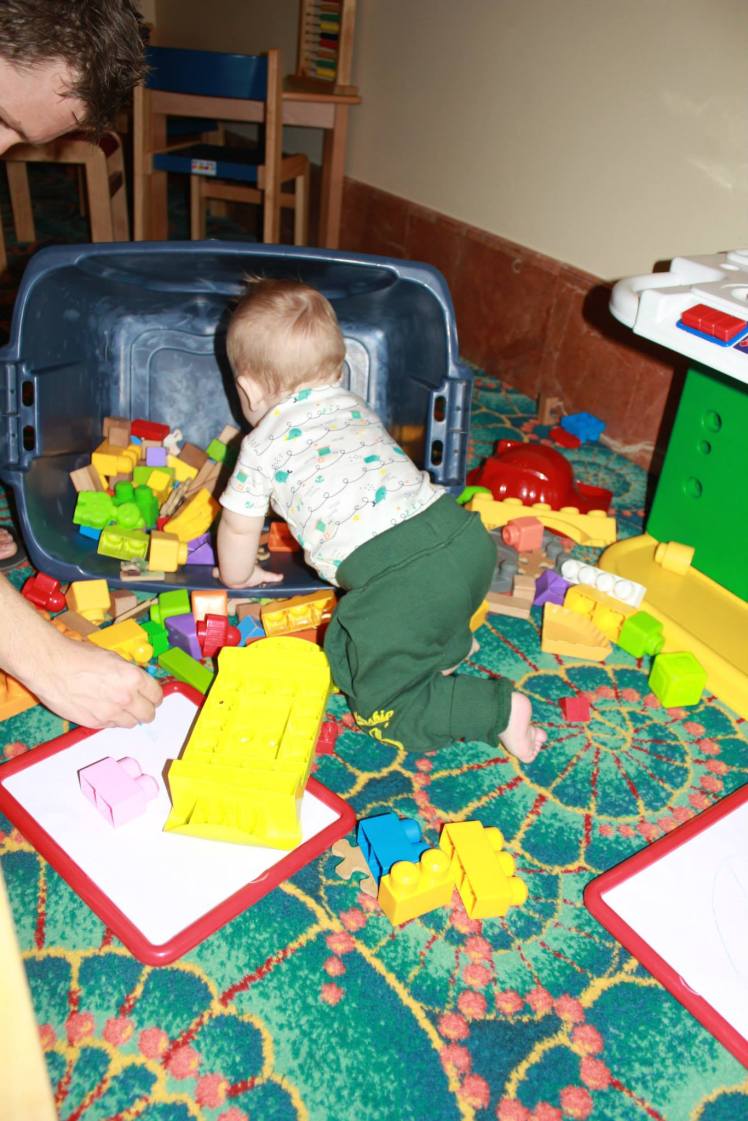 Extortionately expensive, but when you’ve got a 10 month old to put to sleep and you can’t leave the room its a bit of a must… we usually ordered it 30 minutes before bedtime, meaning it arrived just as we were about to put Lucas down, whilst one of us was setting everything out for dinner on the balcony, the other was doing bedtime. 7pm, Lucas asleep, Dave and I on the balcony with beers and butter chicken curry. As I say, it was so expensive, but absolutely delicious, so much so we ordered it again the next day!

Lucas did not want to play when we went to the mall, he moaned the whole time so there was no shopping, and we just about managed to watch the fountains and get a photo in from of them. We were so fed up we didn’t even grab anything to eat.

The (not so) delightful thing about a 10 month old is their lack of concept of time. Cue a 5am start and a walk around the hotel ground watching the sunrise. It was quite picturesque to be fair. Also for the first time in our 9 years together we were actually waiting outside the restaurant for breakfast to open! Breakfast is fab, plenty of choice for us and Lucas, they even had weetabix and warm milk!

Mall of the Emirates

Much closer to Atlantis and easier to get around as its a lot smaller, we rented one of those push along cars for Lucas to sit in which he enjoyed (60dhs for 2 hours).

Fab private beach at the atlantis and Lucas loved the sand and the water, the sea was actually warmer than the waterpark!

It was our first holiday with Lucas and we learnt a valuable lesson, don’t try and still have the kind of holiday you used to before children. DO everything and anything to keep the little one happy and the rest will fall into place around it. Happy child = happy parents and a much more enjoyable holiday!!